ACK! BLOOMBERG IS RUNNING FOR PRESIDENT AND WE NEED TO DUNK ON HIM WITHOUT BEING ANTISEMITIC!

As New Yorkers, we at The Jewish Vote know a thing or two about Michael Bloomberg and his record as the Republican mayor of our city. Alongside our neighbors, we spent twelve years organizing against him.

Here’s what we know:  Michael Bloomberg is an oligarch. As Mayor, he did lasting harm to Black, Brown, and Muslim communities. He’s made transphobic, misogynistic, and racist comments for years. And now, he is using his billions to change the rules, swamp the airwaves with hundreds of millions of dollars in ads, and buy the democratic presidential nomination.

To overcome the noise of his billions, Bloomberg’s record must be criticized — loudly and unrelentingly — by a whole lot of us!

Bloomberg also happens to be Jewish. This guide offers ways to make these criticisms without inadvertently relying on antisemitic tropes that harm Jews and weaken our movements. (See here for polling results from Data for Progress on what critiques of Bloomberg prove most effective).  Find the guide below, or download a copy of it here.

GUIDING PRINCIPLE: If you’re unsure about whether or not what you’re saying might be considered antisemitic, ask yourself — is it true? And is it precise? If it is, then dunk on Bloomberg as hard as you can!  If not, you might be veering into territory that opens you up to accusations of antisemitism. That’s bad because (1) antisemitism is bad, (2) the Right is actively trying to accuse the Left of antisemitism, and (3) it redirects away from the problems with Bloomberg and onto problems with you.

Why it matters: Just say what is specific and true. It is true that Bloomberg owns and controls Bloomberg News, Bloomberg Radio, and Bloomberg Television. That is a fact. Bloomberg does not own all media companies, and the suggestion that he does invokes the antisemitic stereotype that Jews control the media.

Why it matters: Nazi propaganda used imagery of Jews as rats, insects, and octopuses to encourage hatred, fear, and dehumanization of Jews. This imagery is used to this day, with cartoons depicting George Soros as an octopus encircling the world. These images and comparisons trigger real fear among Jewish communities, because they’ve historically precede upticks in violence against Jews. Dehumanization is a tactic used  to justify hatred and genocide – not just against Jews.

Why it matters: There’s an age-old antisemitic trope that Jews are never full citizens, but that we have a global network or “cabal” to which we are loyal or owe allegiance. Today, that same trope often manifests as the suggestion that Jews’ primary loyalty is to Israel — or at the very least that Jews have a “dual loyalty” to Israel — and might undermine our country at any moment to serve Israel. Not only is this a dangerous trope that has been used to incite suspicion of Jews, but it also ignores that there have always been Jews who do not support the State of Israel, and their numbers are growing rapidly. Bloomberg happens to have terrible Israel politics and should be dunked on accordingly — just not with tropes about dual loyalty.

Why it matters: The idea that Jews secretly own or control certain industries or wealth has been used as a justification for and to incite violence against Jewish people for centuries. Antisemitic laws in Europe restricted Jews to specific industries, like money-lending, and then used the prevalence of Jews in that industry to spread antisemitic tropes about Jewish control over money. There’s another reason: Accusing Bloomberg and other Jewish billionaires, like Soros, of buying elections is a tactic used by right-wing politicians, like House Minority Leader Kevin McCarthy. Don’t follow his example. The GOP is the party of antisemitism; we will not be.

Why it matters: This statement can easily be parlayed into an antisemitic and anti-Black conspiracy theory that Jews control Black people. That conspiracy is predicated on the idea that [white] Jews are all-powerful sneaky operators behind the curtain, and that [non-Jewish] Black people are not smart enough or able to make their own decisions, build their own movements, and generate their own success. So, if you’re holding your own community’s politicians and leaders accountable, go for it. Otherwise, it’s important to note that the list of organizations and endorsements paid by Bloomberg’s dollars spans many groups.

We’ve already talked about how Nazis historically depicted Jews as rats, insects, and octopuses to encourage hatred, fear, and dehumanization of Jews, so using those images should be avoided. In addition, images showing Jews holding, surrounded by, or next to piles of cash, are also problematic (Rabbi Danya Ruttenberg explains why here).

This cartoon by artist Eli Valley is a good example of satirical imagery of Bloomberg that doesn’t rely on these visual tropes, but does convey the message that Bloomberg is using his wealth to shape the election. Instead of wads of cash, Bloomberg is pictured taking a Bloomberg Philanthropies credit card out of his wallet — a specific reference to the way Bloomberg’s funding of non-profit organizations has influenced their reticence to criticize him.

The following examples are other visual digs specific to Bloomberg; they would not make sense if applied to a different Jewish person, making them kosher to use (but still make sure to be aware of physical caricature)!

There’s no shortage of harmful and outrageous reasons Bloomberg is unacceptable. We CAN and SHOULD spread them widely.  We can’t come close to listing them all here.

Remember: Make it true and specific to him and his actions and go for it! 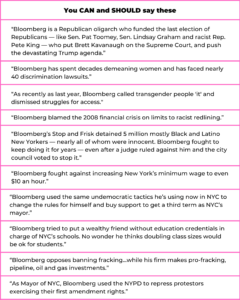 The Jewish Vote is a home for New York Jews seeking to secure a pluralistic city that works for all of us through the power of the Jewish vote. In 2020, we will defeat Trump and elect another cohort of visionary leaders to represent us at every level of government. Together we will build a future with Medicare for All, universal rent control, a Green New Deal, publicly funded elections, fair wages and working conditions for all workers, and an end to mass incarceration and criminalization of people of color. The Jewish Vote endorses candidates who will fight alongside us to achieve all of this and more. The Jewish Vote is a 501(c)(4) project of Tides Advocacy and the sister organization of Jews For Racial and Economic Justice.