The Jewish Vote has endorsed Rep. Jamaal Bowman for reelection to U.S. Congress in NY-16. Scroll down to sign up for our weekly #JewsForJamaal phonebanks!

An Open Letter from Jews For Jamaal

As Jewish voters living in the current and former New York 16th congressional district, we are coming together to express our strong support for Congressmember Jamaal Bowman. We believe it is important for us to speak up in support of Jamaal, as Jews who appreciate his commitment to social, racial, and economic justice.

Our country faces many challenges that require urgent action. Reactionaries have seized control of the Supreme Court, bent on repealing a half century of constitutional protections for vulnerable communities. Authoritarian politicians are whipping up big lies about our democracy and our criminal justice system, while scapegoating immigrants, racial and religious minorities, including Jews. These same forces are undermining key programs that Americans rely on, for our education, our health care, our transportation, and care for older adults and people with disabilities.

Jamaal is not a typical career politician. Before he was our Representative, he was a middle school principal. We have seen him bring the skills he developed creating and leading the Cornerstone Academy for Social Action to our community and to Congress. He is tough but fair, often smiling but never a pushover. Always learning from both his peers and his pupils, from policy wonks and from the people.

Jamaal represents a diverse district and has made it a priority to establish strong relationships across communities and to treat all of his constituents as equal members of one community. As Jewish residents of the district, we have experienced this firsthand. Jamaal is in regular communication, seeking counsel and taking action around communal priorities. As an example, Rep. Bowman has been a key partner to the New York Caring Majority in pursuing a long overdue raise for home care workers. No other member of New York’s congressional delegation did more in 2022 to advocate for and deliver key investments into the care economy.

Jamaal  has introduced 19 pieces of legislation and co-sponsored an additional 480 bills including:

We have found Jamaal to be a person guided by his principles. On more than one occasion, this has inspired attacks against him from both the right and the left, often from outside of the district, by those who want him to fall in line. We are grateful to have someone with the courage of his convictions representing us in Congress.

Click here to join our weekly phonebank on Wednesdays! 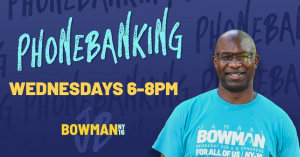